Hi, this is Srividhya here, why did I give my intro again?

Simple, just to remind you about the disclaimer, not the one appearing on the bottom of page but the one I spelt out in the ABOUT section . Now that I have clarified my position, I will write this article with a bit of ease :).

Choosing a title for this write up was indeed difficult, it was like selecting a new born’s name.  The reason for this dilemma will be clear as we proceed through this article. So here were the names, I shortlisted before I chose to stick to this modest title…..

Generally Sridhar and I always plan trips together, but once in a while we have also travelled alone, so while I went about this trip, Sridhar went for a bike trip to “Little Rann of Kutch” hope he writes about it soon. What we did indeed was explore totally opposite terrains, modes of transport, etc. oh did I clarify this trip was like 8 years back, hence am racking my memory for as much information I can provide.

So it all began on 14th August, when Sridhar left for a bike trip and I got random call from my friend -Janaki. The conversation was like this, what you are doing over the long weekend, can we go somewhere. May be just two of us on a girly trip, I asked her where??  She said anywhere and there was a moment of silence but yes, that night Janaki came home for a night stay, we made few calls and Ajay (splendid friend) said he will pick us up and destination will be a surprise.

6 AM there was a Quails to pick us, with Ajay, Anish, Ketan and we hopped in. All along the way Ajay managed to retain the surprise element,  en-route we were having fun (masti). While we were just about to reach the destination there was a sudden silence in the car, everyone was looking out of the window and what we saw just made are heart skip a beat…. It was a Sangam of beach, mountain, light house and a fort, however this place was special, as we were the only one there… not a soul. I was suddenly reminded of Famous Five plot (except that Timmy was missing). Did I tell you the name of the place yet? Its, KORLAI. (am adding few photo, but am sure it doesn’t do much justice to the beauty of the place (camera was not the latest one either). 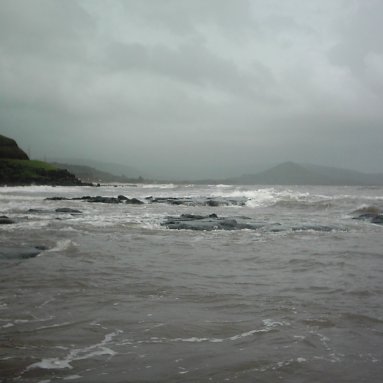 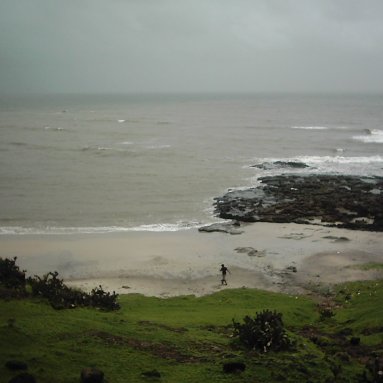 Let me give you details about this place:-

Now getting back to the trip, our car went right until the foot hill of the mountain and just besides the sea; from there the fort and the light house were clearly visible. As a basic instinct when one sees a beach/ sea one can never resist it. Within a blink of an eye right at the middle of the day at 12 pm the five of us where enjoying the cool, salty water of the pristine beach.

After having spent a good 2 hours in the water we all were hungry and famished and we ate some titbits which we had carried along. Then we began our climb to the top of the fort. We all chose not to take the easy route and we started to climb the mountain. We were all on our fours (like our ancestors). A good and exhausting climb was not wasted, we reached the fort which was mostly in ruins, but it clearly had demarcated rooms, (through no roof over head). I remember seeing a shiv temple in the fort. We then walked on a path which led us to the large gate with few (Portuguese) inscriptions. It opened up to a veranda overlooking the sea with 2 large cannons; leading further down to the light house path (I have no pics though). There we met a caretaker of the guest house and Ajay immediately checked if some food could be arranged and there we were lucky to have delicious Khichdi amidst the butterflies fluttering, squirrel running about, the music of the waves hitting the shore, and the sun about to set (I call it PARADISE.) 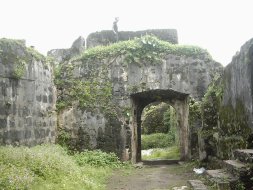 FEW PICS OF THE FORT

Now why did I name the article “Horizon”? On Independence Day, I felt complete independent as my eyes captured the beauty of sea reaching out to the sky. The sky changed its shades as time passed all this in the backdrop of mountain, fort, and the light house.

We wanted to camp there or stay put somewhere within the vicinity, however the caretaker told us due to the long leave the guest house was already booked and that we could not camp on the sea shore due to onset of high tide.

On trying to remember the scenery the latest Tamil song aptly plays in my mind – “Mongil thottam.. mooligai vasam, neranja mounam .. nee paadum geetam …” (We are at the bamboo garden, filled with nature’s fragrance, and your song filling the silence ….).

With heavy heart we began our journey to yet another place.

That’s a different story, will surely write about it soon.